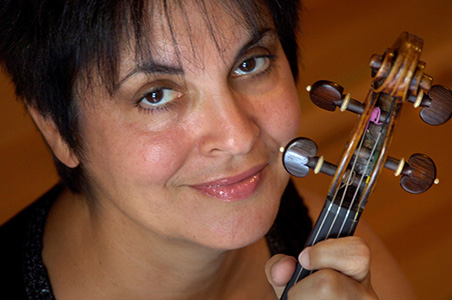 American-born Ida Bieler has set a standard in the course of her unusual career, as a musician of extraordinary scope. Launched into recognition by winning international competitions on three continents, she has since been a regular performer in major music capitals throughout the world, recording for radio and television on five continents and appearing with leading international orchestras.

Ms Bieler’s artistic focus and repertoire stretches from the Baroque to contemporary composition. Awards have included the Cannes Classical Award, Echo Klassik Preis, Fono Forum Stern des Monats, Strad Selection, and Repertoire 10. Ida Bieler was a member of the legendary Melos Quartet from 1993 to 2005, and from 2001 to 2015 violinist of the highly acclaimed Xyrion Piano Trio. She served from 1983-1988 as concertmaster of the Symphony and Opera Orchestra of Cologne, the “Gürzenich Orchester”.

One of the most successful and sought-after teachers in Europe today, she has served on numerous boards and juries. In 1988, she accepted a full professorship at Frankfurt’s Hochschule für Musik und Darstellende Kunst and in 1993 received the appointment of Full Professor at the Robert Schumann Hochschule Düsseldorf. From 2005-2007, Ms Bieler was Visiting Professor at the Guildhall School of Music and Drama in London, and is currently Guest Professor at the Universität für Musik und Darstellende Kunst Graz, Austria. Since 2013 she has been a member of the string faculty at the University of North Carolina School of the Arts, USA. In 2015 she became the Artistic Director of UNCSA’s Chrysalis Chamber Music Institute.